Our Swoopo auction software allows you to run an auction website almost instantly and absolutely no experience needed. It is for anyone and everyone who wants to run a Swoopo auction website and turn your dream into a reality. Manage your entire online auction operation: create new auctions within seconds, and much more! Also this script allows you to run multiple auction types and that is not all it supports multiple languages and payment gateways. 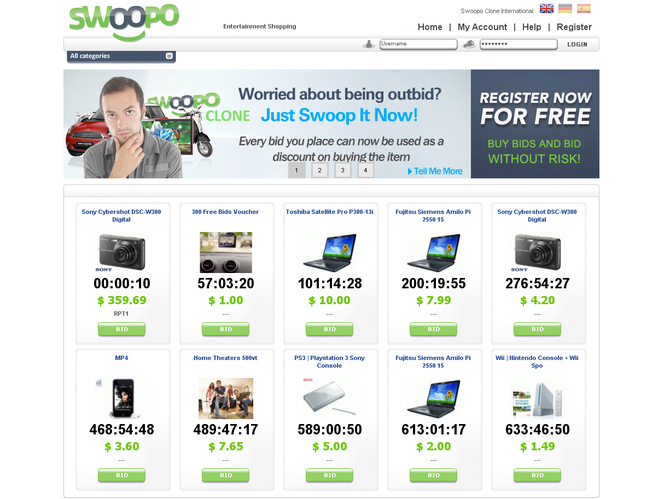 an auction is a process of buying and selling goods or services by offering them up for bid, taking bids, and then selling the item to the highest bidder.
Check All Auction Web Applications

Swoopo was a bidding fee auction site where purchased credits were used to make bids. Prior to changing its name to Swoopo in 2008, the website was called Telebid. Swoopo was operated by Entertainment Shopping AG and based in Munich, Germany. In March 2011, Swoopo's website became inaccessible, and a notice page claimed that Swoopo was experiencing "technical issues." On 26 March 2011, Swoopo's parent company filed for bankruptcy. On 8 February 2012, DealDash the longest running penny auction website in the United States acquired the domain Swoopo.com and the URL currently redirects to DealDash's own website.
http://www.swoopo.com
Check All Swoopo Clone Scripts
comments powered by Disqus
Popular Websites
Popular Categories